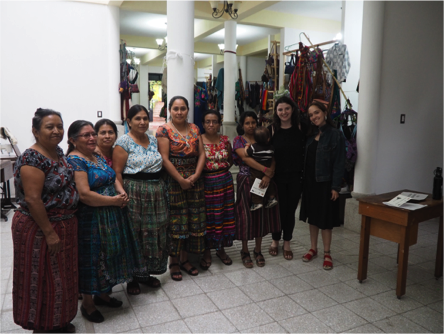 When I received news a year and a half ago that I had been accepted as the PiLA fellow at the Arias Foundation for Peace and Human Progress, I felt a massive rush of conflicting emotions. I was ecstatic about the new opportunity, hopeful that I would learn and grow, but at the same time very scared to be doing this alone, as the only Princeton fellow in San José, Costa Rica. I never expected that a year and a half later I would be the Senior PiLA fellow at the Arias Foundation, developing my own materials on machismo and facilitating capacity building workshops in three countries within the region of Central America. And despite my initial fear of loneliness, I have found an incredible community of Costa Ricans and other PiLA fellows.

Over the last few months, I have had the opportunity to speak about sexism on Buen Día, a popular Costa Rican daytime television program, travel to El Salvador and Guatemala implementing workshops, and participate in two international conferences on masculinity and other gender issues facing the region. I have met incredible scholars from all over the world and connected with an incredibly diverse group of workshop participants, including the prison population in Costa Rica, indigenous youth in Guatemala and the Supreme Court of El Salvador. Machismógrafo has also allowed me to connect with other incredible PiLA fellows. On the tour of workshops in Guatemala, I met a few members of the current cohort and implemented workshops with two PiLA partner organizations in the Lake Atitlan region.

For me, the most rewarding part of these workshops has been the opportunity to have meaningful, profound conversations with participants as they reflect on their experiences with machismo. Day after day, I am humbled to be able to share and listen to ideas on how to reach gender equality, to begin to rid ourselves of our machista behaviors and stereotypes and recognize and support media outlets that promote positive gender roles. I have have been a witness to the way that permanent spaces of dialogue on gender inequality and sexist microaggressions can truly have an impact on an individual or an institution.

I will never forget one interaction that I had in a workshop in El Salvador. I brought up street harassment, a phenomenon that in San José occurs so often that I barely notice it anymore. I am not alone in that feeling and know women and people all over the world experience acoso callejero daily. In this particular workshop, a young girl of around 11 said that strangers say things to her most days when she walks to school. Hearing this almost broke my heart, but it was even more powerful when one of her classmates, a young man of about 12, raised his hand and commented that he thinks it fun to say things or shout at muchachitas bonitas. He told me that his dad, uncles, cousins, siblings, and friends also harass women, so he thought it was perfectly normal. And for him, it is.

He went on to tell me that his older male siblings had even touched young women inappropriately on public transportation, and a few other boys chimed in saying that they had also made comments to or about their female classmates. While I was shocked and upset by what he was saying, I don’t blame him. We are a product of our societies, and El Salvador has alarming rates of violence against women. I decided to take a break from the rest of the PowerPoint and led a group conversation on the consequences of this type of behavior. The conversation was incredibly productive and this young gentleman and a few of his friends approached me afterward to say that he had never considered why what he was doing was wrong and would think twice before continuing to harass young women and girls. His teacher emailed me a few weeks after the workshop to thank me and says that she has seen real changes in her students as a result of this conversation.

Although these are small interactions, I see the potential for huge change. In a region with rampant violence against women, I truly believe that, we can create a more peaceful, just and equal society by recognizing micromachismos and adjusting our own toxic thoughts and behaviors. One by one, we can change the gender dynamics within our households, workplaces, public spaces, and media. And one by one, we can open opportunities for women and girls and make this world a safer place for all.

If you would like more information about Machismógrafo (The Machismo Meter), or a digital copy of the book, please contact me at emma@arias.or.cr.