Wrong Jose: Outreach and Community in the Dominican Republic

Wrong Jose: Outreach and Community in the Dominican Republic 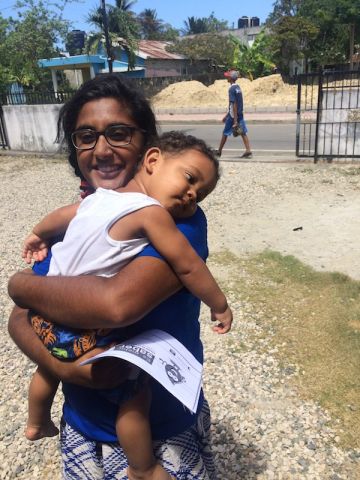 I realized I was in love with the Dominican Republic while I was waiting on the side of a street making googly eyes at a baby and the parents, amused and unafraid, offered me the child to hold and a chair to sit on. The love took a while to hit. From the start, living in the DR and working at the education and community development organization The DREAM Project inspired and pushed me. I learned about programming, teaching English, and communications in a non-profit context from mentors invested in my growth, threw myself into projects I’d never thought myself capable of executing, and enjoyed magical little moments like speeding down the highway in a shared car with bachata on the radio and unrealistically bright stars outside the window. But for months I mourned leaving the home I’d built during my previous 2 years teaching English in Colombia.

Then it became my main responsibility at work to track down every single one of the 480 participants of DREAM’s youth workforce development program, and administer an impact survey. After two months of morning, afternoon and night phone calls and extensive Facebook stalking yielded the majority of the surveys, I had 40 elusive program graduates to hunt down. Armed with community partners who knew the area well, I ventured into unknown towns to visit the remaining participants’ last-listed address and ask friends, neighbors, strangers, whoever looked friendly or knowledgeable, if they knew the names on my list. The consequent adventures taught me to truly appreciate the community I had become a part of.

My site visit in La Cienaga started in a predominantly Haitian-immigrant neighborhood known as “The Cave”. It took a while to find someone who spoke Spanish. “Is she Haitian or Dominican?” was the main question about the name I asked about. “Is she a black girl with braids?” was the other. I had absolutely no idea. My community partner was a resourceful sort, and suggested moving on to name 2.

So I asked, did anyone know José Luis? A taxi driver had his phone number: “But he’s asleep now! Go wake him up.” We wandered to a house next to a river at the end of a long road populated by curious chickens. There we found a shirtless man answering to the name José. After we apologized for waking him up at 2 pm, my intern asked if he’d participated in our program, A Ganar. He squinted: “What is A Ganar?”

It was the wrong José.

We were more successful with the rest of my list, who turned out to be the community partner’s sister’s neighbors. On the way back, the taxi driver who had pointed us to the first José offered us a ride back to the highway. “Did you find him?” No, I said, we were looking for José Luis, not José Bonilla (a fact I’d mentioned approximately three times). “Luísito! Why didn’t you say so! That’s my nephew! Here, let me give you his number, you can call him anytime between 2 and 7!”

In the hills and valleys of La Unión and Villa Liberación, I prepared better and investigated a list of nicknames as well as official names. My community partner here had the coolest nickname of all. He was hailed as soon as we got off the car: “Volcano! Lend me your woman!” Volcano explained the intricate system of nicknames in his community as we went uphill and downhill and uphill again, checking off names. “Charlie? No, that’s Heavy! Edison, he’s the fat one, I know he did the program, they call him Ruffian. And that’s Lizard and…”

As we meandered along, people smiled warmly back at me. They invited me to sit on their porches and rest. One guy filled out his survey and offered to show me how to kill a chicken. The sea was extra blue and the clouds extra fluffy from high up above on those street corners. This made it difficult to curse out Volcano for some of his steeper shortcuts.

Montellano was bigger than some of the other communities, with well-developed roads and a vibrant town center. But our program participants to be surveyed turned out to live in a settlement about 15 minutes away from the center, in clusters of tiny houses inhabited by predominantly Haitian-origin immigrant families. My intern informed me that the big, fenced-in houses in the entrance of the settlement were mostly Dominican-owned. My interactions hinted at the separate and unequal nature of Haitian-Dominican coexistence: “That name sounds Dominican, I think he lives in that other area.”

My intern disappeared to check on a sick friend when we finished and I lurked outside a participant’s house waiting. This was when I made eye contact with a beautiful, tearful baby. Her parents saw me looking and immediately gestured at me to sit with them, and the baby stopped crying to tug at my hair and bracelet. I was tired and sunburned and hungry, but my heart felt full in that moment. That moment of acceptance, to me, represented my community in the DR so well.

I learned a lot, both professionally and about the country and its culture, through the survey administration process – the communications and project management skills involved in executing monitoring and evaluation activities in a non-profit, using public transport to get to different areas, a small glimpse into the large and complicated issue of Haitian-Dominican relations. I gained some insight into the nuances of an intricate system of connection and recognition, how the names of people and streets are not so much fact as filtered through years of how people saw them and interacted with them.

Mostly, I learned to love the willingness of people to participate in and bear witness to other people’s lives. I was not entitled to their help, to their phone calls in search of someone for the vague reason of surveys, their readiness to accompany and offer. But I got it anyway. I experienced this in my daily life as well, my neighbors always ready to get involved, to offer suggestions and help and to bring me tea 3 times a day when I was sick. I experienced this in Montellano, the acknowledgement of my humanity with the baby and the chair. And I experienced this in all the communities in between. Even as an outsider, I felt enveloped by community in the DR, always.