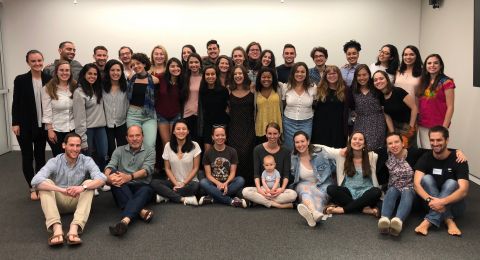 My witnessing your recent orientation program in Princeton, so beautifully organized by Sarah Town and Michael Stone and supported by Kim Gordon of the FAC and other alums, served to reaffirm the motives for my commitment to PiLA: you give me hope for the future.

When we on the board are seeking donations to our organization, we are sometimes questioned about the value of contributing to a year abroad for some up and coming young women and men recently graduated from high quality colleges and universities, particularly when there are so many other causes that legitimately require immediate attention. I would never question the motives or justification for supporting some of those efforts, on the contrary, I salute them. But I would ask that a potential donor to PiLA consider the following.

The justification for supporting fellows such as you, the return on investment, if you will, can be measured over the many ways that each of you will not only strengthen our partners, they themselves dedicated to the same mission as are we, not only provide support to the beneficiaries of those partners, many also requiring immediate attention, but you will also take what you learn during the year and build on it over the subsequent decades, multiplying many times over the positive impact of your experiences.

I wasn’t very good at the study of economics but I did have the advantage of working with some very qualified social scientists at the IDB. And if there’s anything I learned from them, it was that an investment in future global leaders such as PiLA fellows is highly profitable, to the benefit of the world we wish for ourselves, our children and theirs.

I close with the words of President Oscar Arias at the celebration of our fifteenth anniversary:

“Be the bearers of light, the voices of reason.”